William Pitt as a Boy - attributed to George Romney 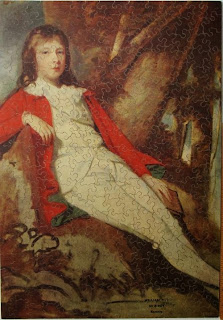 The likeness above is of ‘William Pitt as a boy’ by George Romney (admittedly the only image I have seen of this online is a 1930s puzzle!). I note that a detailed description of this portrait has been made on pg. 124 of the 1904 book ‘Romney: A biographical and Critical Essay with a Catalogue Raisonne of his Works, Vol. 2’ by Humphry Ward.


Although the author of that book claims that it’s doubtful whether this portrait represents Pitt (Ward, 1904: 124), he gives no reasoning or argument to support his statement, and the likeness to Pitt is striking.

In 1878, this portrait was in the possession of a Sir Coutts Lindsay, but who knows where it is located today? I haven’t been able to locate another image of this on the internet, but I’d sincerely love to see it in person (please, not as a puzzle!). 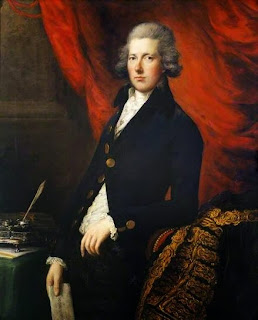 If you compare Pitt’s slouching stance and the relaxed positioning of his hand in the portrait of him as a boy to that of the well-known portrait of Pitt by Gainsborough Dupont (above), you can really see a resemblance. Even the choice of setting in the portrait of him as a boy is something in accordance with Pitt’s personality: He is represented holding a book, and reading underneath a tree, something he was described as doing often when he could relax in the countryside (see William Hague, 2005: 213; Greville, 1911: 123; Ehrman, 1969: 594).