I consider myself to be what I call an "on-the-ground" amateur social historian, and part of this involves physically getting out to places of historical relevance or significance. Therefore, on a recent trip to London I was looking specifically for John Pitt's (2nd Earl of Chatham) last home. His country seat was in Gedding, Kent, however his obituaries all state that he died at Charles Street. John Pitt was William Pitt the younger's older brother, and he outlived him by over 29 years.

The Gentleman's Magazine, Volume 158 (1835) reported that John Pitt died on September 24, 1835 at his London town residence on 10 Charles Street, Berkeley Square. He was 79 years old, and by far the last surviving member of his immediate family. The earldom of Chatham was made extinct upon his death as he had no children. John's wife had preceded him in death by 14 years.

Miraculously, the Blitz of 1940-1 did not destroy the 2nd Earl of Chatham's former residence - although many of the surrounding houses were flattened - and thus it survives to the present day.

Below are several photos I took of the exterior of 10 Charles Street, Berkeley Square: 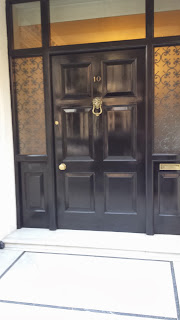 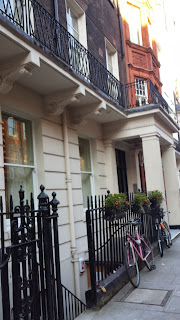 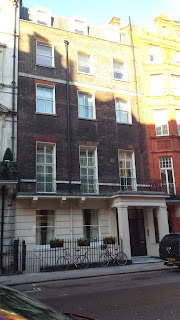 More than likely, the property has been altered significantly on the interior to what it must have appeared in John's day, however the exterior remains a quintessential Georgian townhouse. As the numbering of London buildings tend to change quite dramatically over the centuries, I felt it was vital to double-check my facts to ensure that the modern-day 10 Charles Street was also the same address in 1835. To do so, I have a digital copy of Horwood's 1799 London map to verify my conclusions. Sure enough, it was also 10 Charles Street in 1799, therefore we can be almost certain that it was the same number 36 years later. Below is a screenshot of Charles Street, showing number 10 in the same position as it is in the present day: 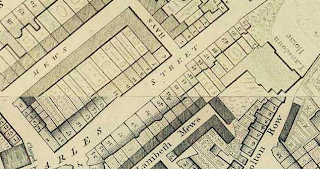 Therefore, it can safely be assumed that what we're looking at today was the very same residence where John Pitt, the 2nd Earl Chatham, took his last breath on the morning of September 24, 1835.

Posted by Stephenie Woolterton at 02:22