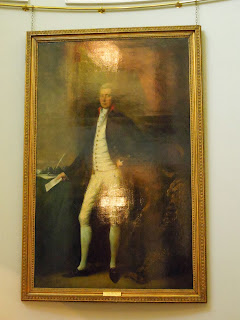 In a letter written to William Pitt on May 5, 1796, the artist Gainsborough Dupont asks him to appointment a time for a portrait sitting. The original letter is now located at the UK National Archives. The purpose of the painting was to commemorate Pitt as Master of Trinity House on Tower Hill. Pitt was then just 37 years old, and had been Master for several years. The Trinity House building was newly completed (building work had begun in 1794), and it was now urgent to finish Pitt’s portrait.

“Mr Gainsborough Dupont presents his humble service to Mr Pitt, and hopes he will pardon the liberty he takes in requesting that Mr Pitt will have the goodness to appoint a time for sitting for his portrait that is intended for the New Trinity House. Gainsbro. Dupont has prepared the Face from one of the Pictures Mr Pitt did him the honour of sitting for some time since and has it in such a state of forwardness that if he could be so fortunate as to obtain half an hour for the purpose of touching the Features and sketching the Person it would be sufficient for him to finish the Picture. Gainbro. Dupont would be happy to wait upon Mr Pitt at any time and place he would please to appoint, and from the very anxious desire of the Deputy Master and Elder Brethren that it should be completed and placed up on Trinity Monday with the other Pictures which are nearly finished, G. Dupont is under the necessity of soliciting Mr Pitt to mention an early day.” 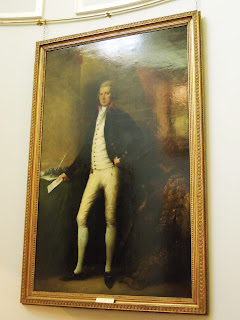 Needless to say, Gainsborough Dupont was in a hurry to quickly finish Pitt’s portrait! I wonder when and where the sitting eventually took place? Presumably, it was not long after the date of the letter. Pitt had previously sat to Gainsborough Dupont at Walmer Castle in 1792, so the artist would have been familiar with Pitt’s facial features.

Flash forward to 2013, and Mr. Pitt’s full-length portrait still hangs on the quarterdeck of Trinity House.

Posted by Stephenie Woolterton at 03:11