'I desire to be the Godfather'

Amongst the Pitt items at the Rare Books and Archives Room at Pembroke College, Cambridge, there are are some fascinating Pitt letters which primarily date or relate to his time at the college. Of particular note is a short missive William Pitt wrote to his father's accountant, William Johnson, on May 1, 1773. It was written from Burton Pynsent, Somerset(shire), his parent's estate in the West Country, and dates from the time Pitt was recently entered in the admissions books at Pembroke. Amongst other news, including rejoicing on the birth of Johnson's son, William writes:
"If his [Johnson's son] name is not yet given I desire to be the Godfather and have him for my namesake (which will likewise be yours) unless some other name is agreed on."
Below are the photos which I was allowed to take of this letter: 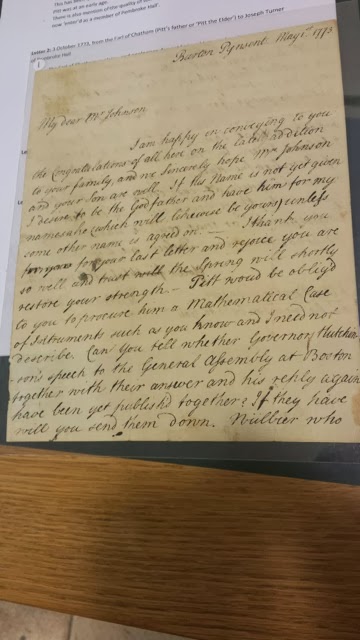 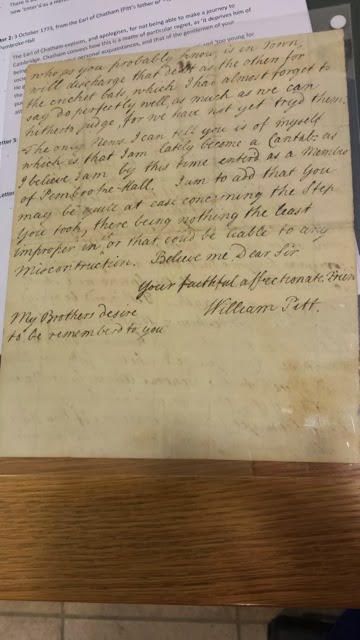 I found this particularly interesting as William desired to be a Godfather when he was less than fourteen years of age! This may, of course, have been a common practice in the late 18th century (do let me know if it was!), however this is the first instance I have come across.


The Pitt family were known for being very kind and informal with their domestics, tutors, and physicians, and the Johnson family appear to be no exception. I have not been able to track down whether William’s offer of being godfather to Johnson’s son was accepted, but I am persuaded that it must have been given the respectable status of the Pitt family.
One of these days, I seriously need to count how many godchildren Pitt had! I know for a fact that he had at least six, but I believe it may have been closer to ten. The more I learn about Pitt’s selfless kindness, the more I admire and respect him. There will be another post on Pitt's love of children in the future, so watch this space!

Pitt Letters, f. 1, Rare books and Archives room, Reproduced by permission of the Master and Fellows of Pembroke College, Cambridge.
Posted by Stephenie Woolterton at 04:07